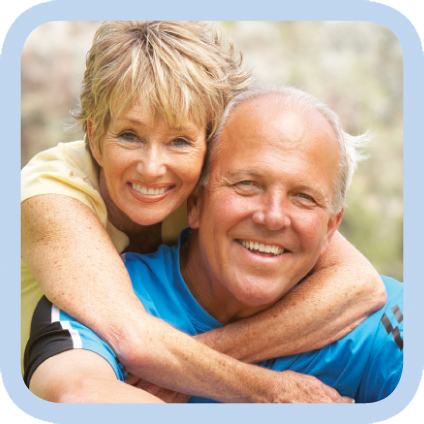 The aging process is inevitable. However, restoring lost male vitality is within reach. The hormones involved in this restoration can now be collectively measured in one salivary sample using the regular or expanded Male Hormone Panels™ (MHP™ and eMHP™).

At or around puberty, the important male hormone testosterone reaches adult levels. For a long time it was believed that men maintain adequate levels of testosterone throughout their lives. Many men in their ﬁfties or older, however, experience a progressive decline in their energy, vitality, sexual performance and mental capacity. This decline has been labeled “andropause.” The causes of andropause are believed to be a reduction in testosterone and other androgens. The testicles show a progressive annual drop of 1-1.5% in testosterone output after age 30. Furthermore, as men age, a 1-2% annual decline in the free fraction of testosterone and a progressive annual increase of 1-2% in both luteinizing hormone (LH) and follicle-stimulating hormone (FSH) has been documented. The clinical manifestations of andropause usually lag ten to twenty years behind the onset of hormone decline. Statistically, andropause affects at least 40% of men of age 55 to 65, and up to 80% of those of age 65 years or more.

Knowing the levels of the seven to nine hormones measured in the two male hormone panels™ helps you formulate an effective plan to relieve andropausal symptoms.

What We Test and What It Tells You

Using a saliva sample, the regular MHP panel measures seven hormones: DHEA, androstenedione, testosterone, dihydrotestosterone, estrone, estradiol and progesterone. The expanded panel measures these seven hormones plus FSH and LH. The hormone levels in saliva reflect the active tissue concentrations, while blood contains mostly protein- bound hormones, whose active levels can only be estimated at best. Urine contains both the active hormones and numerous metabolites and can only provide a gross estimate of hormone production over time. Active fraction measurements from saliva are superior to blood and urine for use in diagnosis and treatment.

This panel includes all the tests in the regular MHP™, plus FSH and LH. Early detection of an increase in FSH and LH levels is indicative of a progressive decline in male sexuality and functionality. Salivary measurement of FSH and LH is a technological breakthrough that separates Diagnos-Techs from other laboratories.

Testosterone and sperm production in males are simiar to estrogen and ovulation in females. The pituitary neurohormones FSH and LH stimulate and regulate spermatogenesis and testosterone production respectively.

The expanded Male Hormone Panel™ is helpful for the following clinical uses:

Beneficial Outcomes of Using the Regular and Expanded Panels

Data from the MHP™/eMHP™ panels can be instrumental in developing treatment plans that use hormones to replace and balance endogenous production. The benefit of these treatment plans include:

Save this product for later